One Less Car at the Woodford Folk Festival

We owe the motor vehicle so much. It’s liberated us from the tyranny of distance, given us freedom and the ability to expand our horizons, and inspired some of the best rock songs ever (all by Chuck Berry).

However, it’s come at a cost. Our four-wheeled friends gobble up space, add to urban noise, and create a lethal cocktail of gases – the effects on the atmosphere of which may be unseen, contribute greatly to climate change.
This pollution has health impacts as well, notably respiratory problems, and somehow we accept death and injuries from vehicle accidents as the norm. Then there’s the congestion we’ve all suffered through, road rage we’ve seen or experienced as well as other unacceptable driving practices.

So what does this mean for Woodfordia?

You won’t see much road rage from Festival patrons – it’s the sort of event whose spirit is more likely to diminish than encourage such behaviour – but most Festivilians do use the motor vehicle as their preferred mode of transport and this has created ongoing problems.

Gone are the days when cars were banked up for huge distances on Boxing Day, thanks to wise management. Harder road surfaces has meant less dust in dry conditions and fewer vehicles being bogged in the wet years so it’s no longer a case of needing either the water-truck or the tow-truck.
Despite these advances, onsite congestion remains, as well as the wider question of the Festival’s carbon footprint.

Rows of vehicles in the Season Camping area don’t do much to enhance ambience, and it seems a terrible waste for those scarce shade trees to provide shelter for cars. Unnecessary traffic frequently raises dust and poses safety issues, particularly for children riding around on bicycles. 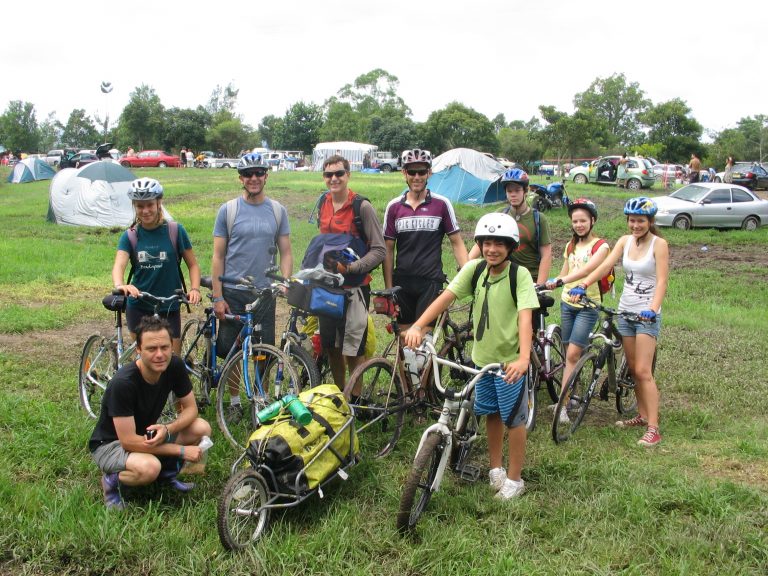 Happily, solutions are in sight. Patrons need to purchase a vehicle pass. There’s a charge for parking in Season Camping, but motorists will also have the option of driving in and unloading their gear before parking in a separate designated parking area – at a much cheaper rate.

Public transport holds the most promise, but if you’re aiming for the full Festival experience you’ll probably need camping gear, clothing and possibly food for a week.
Maybe add a guitar or djembe, and logistically it all becomes too challenging to catch the train from Brisbane to Caboolture and transfer onto a shuttle bus.

The Cycle to Woodford scheme was largely successful because the Festival offered a free luggage transport service. We organised a pick up point with Epic Cycles, a bike shop based in Brisbane, and cycling patrons found luggage awaiting them when they arrived on site.

Our current One Less Car project hopes to build on this success by offering a similar service to bus travellers. We are trialling the concept with volunteers, organisers, members (citizens) of Woodfordia Inc and other committed Woodfordians. For the 2018/19 Festival, we hope to have an improved bus service (direct express buses from Brisbane’s Roma Street station) and expand the luggage service to include bus travelling patrons.

The One Less Car project is seeking Woodfordians who can offer their home as a luggage pick-up point for a few days before the Festival (and after as well for luggage drop-off). If you have a secure place such as a lock up garage, and plan to be at home for the relevant period, we’d love you to take part in our trial.
We’d need four or five luggage collection points at strategic points around Brisbane City.

The next step is for Woodfordians to participate by using the service. It’s free. Without luggage to deal with, it’s much easier to reach the Festival with the train/bus combination and, if the concept is accepted by those most closely connected with the Festival, there’s every chance that more patrons will come on board.

We’d love you to become involved with our trial. If you are able to help with a luggage drop-off point, email onelesscar@woodfordia.com with details of your location. If wishing to utilise the service, get in touch with us at the same email address, and let us know how many in your group would like to participate.

We are yet to finalise details, but will be using the Facebook extensively to keep you informed – primarily via the One Less Car page.

You are welcome! Our organisation provides equality of services and care to everyone of all age, ability, gender, race, religion or belief or sexual orientation – or even how well you play the fiddle.